ROWfit ran the Irish Indoor Rowing Championships in the University of Limerick PESS building in March 2013. Here’s the event report for the IIRC March 2013

They came to Limerick from Bulgaria and Bavaria, Derry and Durham, from near and far to witness and be part of the Irish Indoor Rowing Championships in Limerick, hosted by ROWfit and Joe Cantillon with Rowing Ireland and a host of willing and very capable volunteers. There were 78 categories raced, over 400 entries with close to 500 competitors ranging in age from 11 up to 72 years of age and oodles of spectators. Many people rowed more than once and some even managed to notch up three victories!

24 Races were held over the course of the day starting at 9am and ending at 4.30pm. Races were spread over 36 ergs on two screens, each ‘hosting’ a race after which individuals’ times were amalgamated and prizes awarded.

Over 80 competitors came from overseas, some of whom picked up titles at the CRASH-B world championships in Boston USA last month. Men’s 2000m 40-49 Lightweight World Champion Jonathan Doyle of the Paddy Power IRC was along and pulled a 06:29.0 but was beaten into 1st place by Philip Healy of Team Oarsome out of Belfast who pulled a 06:26.8. There were some very big people pulling some very fast times!

The Junior Set-Time events started the day off with many of the junior competitors achieving some great results while the more senior competitors steadied their own nerves for their own races. Inaugural wins by Sarah Murphy of St. Michael’s Rowing Club (07:49.3) and Ewan Gallagher of Athlunkard Boat Club (06:54.9) in the Junior 16, set the scene. The 2k events began shortly after with the various Men’s races with M40-49 won by Robert Brennan, 2nd to Jeff Gay and 3rd to Ger Sheehan; all bettered however by a great performance by Ken MacDonald in the LM40-49 in a time of 06:29.2 –he almost missed the race and had very little warm-up due to Joe getting the event back on time! Sorry Ken, we’re glad you won.

In the ladies events Gill Prescott of Durham ARC managed to move her own achievement to still higher levels by breaking her own World Record set at the EIRC recently, turning in a 2k of 7:20.2 in the W50-59. With 08:12.1 Margot Lawlor of Callinafercy achieved a new LW40-49 Irish Record. 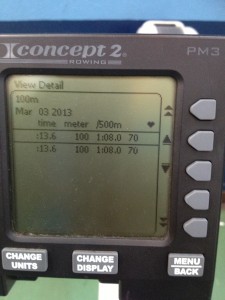 On a separate note Sean Dickinson who pulled a 01:18.7 in the MO 500 also pulled an astounding 13.6s for the 100m sprints, forgot to take a picture of the spectacle and had to go do it all over again!

Some great tenacity was shown by all from J14s being encouraged to keep at it to the Lightweight Junior Men’s J18 Patrick O’Connor who after a hard row the previous day at Erne HOR still competed and managed a PB to take the race.

The day flew by with the 500m sprints recouping earlier lost time, the races culminated in three large Team Relay races where up to 144 competitors all competed at once. Simply put, the teams of four had 2000m to pull however they wished on one erg without interfering with their competitors. Many senior teams watched closely as the junior teams figured out the best methods and styles to achieve the quickest 2k times. The men’s brute force was contrasted by the ladies smooth transfers and excellent cooperation all ‘round and made for an all inclusive round up to a fun and enjoyable day 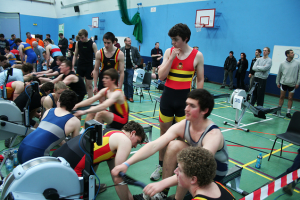 The next IIRC is already being planned with new dimensions being explored to make it an even better experience for all involved.