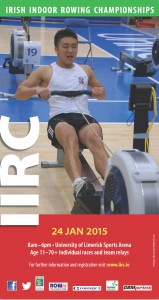 The Irish Indoor Rowing Championships 2015 took place in the UL Arena on Saturday 24th January 2015. What has become a point of interest in everyone’s rowing calendar, it was moved to its new January date and made a compulsory fixture by the High Performance Coaching team for any Irish hopefuls. The IIRC 2015 continues to attract more entries from abroad each year seeing the standard IIRC raised yet again.

Two months beforehand, the Irish PROVINCES IRC event was run in the same venue with 40 brand spanking new ergs in two banks of 20 where we saw new records set and considerable junior talent flex their muscles (literally) in their warm-up to the IIRC.
As expected, ROWfit, the event organizer, had 60 new ergs in three banks in the same arena for January’s IIRC event to facilitate the expected numbers. Interest has been piqued. Big names intending making it onto the Irish Squads were in attendance although many of whom were restricted to Wattbike tests due to injuries.
With the World Championship CRASH-Bs taking place as ever in Boston on Sunday, March 1st, 2015 at Boston University’s Agganis Arena, the IIRC was perfectly timed to provide those Indoor Rowing hopefuls (we have quite a few) with an indicator of what they are going to achieve stateside.

Some outstanding races were witnessed with a new Hwt Irish Record set by Lisa Dilleen of Grainne Mhaol who took the Women’s Open 2015 Title in 06:46.7s in a tight race against Genevra Stone Cambridge BC USA 06:47.9 (placed 7th in the 2012 Olympics in the 1x)

And not to be outdone Siobhan McCrohan of Tribesman RC set a new Irish Lwt Women’s Open record of 07:14.7 breaking her own recently set Irish Record.

In the men’s categories Queens took two of the top spots in the Men’s Open event as Philip Doyle QUBBC came in with 06:01.7 over the 2000m followed by a huge effort by Eimantas Grigalius of K-Leisure 06:03.5 and Tiernan Oliver QUBBC in 06:05.1.

Not to be left out the girls also put on a fine performance with Emily Hegarty of Skibbereen RC coming in 1st with 07:14.4 followed by Elizabeth Clarke from Portora BC in 07:21.5  and in 3rd position Zoe Hyde of Muckross 07:26.6.

Names for the relay teams started showing some thought too: NUIG had the ‘Ripe Bananas’ and LEE RC cooked up ‘Cork’s Finest Ladies’ to Blackrock’s ‘Bleed Yellow’!?

Several World Champions attended – Jonathon Doyle, Sinéad Jennings plus we had Sanita Pŭspure (4th in the world last September) although the latter pair had to make do with a gruelling test on the bikes set by National Coach Don MacLachlan!

All in it was a super day showing that Irish Rowing’s pool of talent is getting deeper and should bear fruits in the years to come.